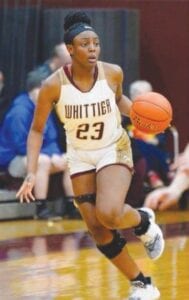 Over the past four years, Grace Efosa was a culinary student with Whittier Vocation Technical High School, whipping up dish­es of the mouth-watering variety. However, it was the recruiters at Providence College who ultimately served the Haverhill teenag­er a once-in-a-lifetime delicacy. Immensely gifted in both the gymnasium and the kitch­en, Efosa in November graciously accepted a four-year basketball scholarship with the Friars.

“It’s a great feeling,” Efosa said of receiv­ing the scholarship. “It’s unbelievable that I got a scholarship for Division 1, especially since I haven’t played (basketball) for that long.”

Efosa, who played AAU basketball, need­ed only two seasons of high school hoops to generate widespread buzz among college programs. She drew the attention of heavy­weights Villanova and Georgetown, and a 43-point game during her sophomore season wowed the recruiters from Providence.

“She’s a deadly shooter from three-point range, mid-range, and pretty much anywhere else,” Whittier coach Kevin Bradley said of the 5-foot-9 point guard. “But that’s not what impressed (the scouts) the most. They really liked how she could handle the press and hit the open man and distribute the basketball. And they loved how she played defense.”

Efosa cruised through her sophomore sea­son as the league’s scoring champion with a lofty 26 points per game, helping the Wild­cats post a respectable 10-11 record. Antic­ipating a momentous junior year, Coach Bradley caught a quick glimpse of Efosa in the early days of the 2018–19 school year.

“I saw her hobbling down the hallway on crutches,” recalled Bradley, who has been coaching at Whitter for 22 years. “I was thinking it was just an ankle injury, but it turned out to be much worse. She had torn her ACL in a summer league game. I couldn’t believe it—out for the season.”

However, the year-long hiatus was hard­ly enough to deter the college scouts. Provi­dence offered Efosa the scholarship a month before she began her illustrious senior sea­son.

“This was amazing for both Grace and the school,” said Maureen Lynch, Whittier’s superintendent. “It’s even more remarkable that she didn’t play her entire junior year but still received this kind of offer. Coach Brad­ley works tirelessly for his players in trying to land them scholarships and get them into good schools. This was a terrific all-around accomplishment.”

With the scholarship in hand, Efosa had a monstrous senior season, reclaiming the league scoring title and powering the Wild­cats to stellar 16-5 campaign. She bucketed 22 points in her first outing in two years, a 61- 42 thumping of Innovation Academy, before soaring through a 34-point night in George­town.

A 32-point performance against Great­er Lawrence secured the CAC crown for the Wildcats.

However, Efosa’s season-defining perfor­mance came in a 66-52 drubbing of Shaw­sheen Tech, when she poured in 28 points while grabbing 11 rebounds and dishing out nine assists.

“She would have been a 2,000-point scorer if she hadn’t gotten hurt her junior season,” said Bradley. “In the history of the Merri­mack Valley, we haven’t seen too many girls make it into a Division 1 college program, so this is pretty special.”

Bidding adieu to the graduating Efosa, Lynch and Bradley marvel at her attributes, which transcend the basketball court. “She was one of those kids who always had a smile on her face,” said Lynch. “Not every kid is happy to be at school, but she always was. She was a great student and a terrific leader to her teammates.”

Bradley, also the school’s athletic director, agreed. “She is the complete student-athlete,” he said. “If you had to pick how you wanted your daughter to turn out, you’d pick some­one like Grace Efosa. The way she conducts herself both on and off the court was extraor­dinary. And the way she interacts with other people is absolutely ideal.”