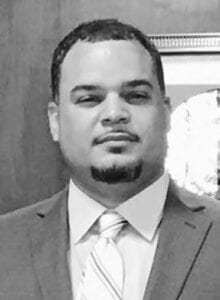 Mayor James J. Fiorentini has appoint­ed Iraq War veteran Luis Santiago as Haverhill’s new veteran service officer. Santiago, who served in the US Army from 2001 to 2005, began his new job in early July. He replaces Amanda Buckley, who left the position in June after her betrothed, a US Marine, was transferred to a military base in another part of the country.

Santiago, 39, served as an infantryman in the Iraq War and was a soldier in the brigade that captured Saddam Hussein in 2003. He most recently was an intern in the Lawrence Veterans’ Services office and is a 2018 graduate of Northern Essex Community College and a 2019 gradu­ate of Merrimack College. He received his master’s degree in public affairs from Merrimack in June. Santiago speaks flu­ent English and Spanish and is proficient in many computer applications.

“We had a number of great applicants, and I was pleased to select Infantryman Santiago,” Mayor Fiorentini said. A screening committee that included the city’s personnel director and human ser­vices director vetted the candidates.

Santiago, a Lawrence native who lives in that city with his wife, Johanna, and their four children, said he’s excited for the opportunity to help Haverhill vet­erans. “I’m committed and passionate about helping veterans, so this was a po­sition I was very interested in as soon as I heard about it,” he said. “The mayor is doing a great job moving Haverhill for­ward, and I’m excited to be a part of that now and to start helping veterans and the city.”

While stationed at Colorado’s Fort Carson in the early 2000s, Santiago main­tained and managed data bases, person­nel assignments, promotions and related personnel actions. Before his Lawrence internship, Santiago was a manager at a pharmacy and for a health-care provider.

Among other duties, a veteran service officer determines eligibility for veterans benefits through reviews of military dis­charge papers, Department of Veterans Affairs records and related documents; decides the extent of financial need and the amount of aid to be given; counsels veterans and their families about avail­able benefits; arranges for veterans’ buri­als; and helps plan local military obser­vances and holiday celebrations.

Haverhill’s VSO office is located in the Citizens Center on Welcome Street. San­ tiago can be reached at 978-374-2388 or lsantiago@cityofhaverhill.com