Rolling on the River

As a Haverhill youngster in the 1990s, Connor Hayden knew the Merrimack River well: Its water was as rank as its reputation.

“I remember having conversations with my father about how dirty and polluted it was,” recalled Hayden, now 34. “And that was pretty much how I and everyone else knew of it. It wasn’t a good thing.”

After two decades of restoration efforts, however, the Merrimack has become a cleaner, purer sanctuary for rowing enthusiasts, including Hayden and the members of his Haverhill High School crew team.

“It’s so much different now,” said Hayden, a 2006 graduate of HHS. “It’s much cleaner. You’ll see people in the water, eagles on the river. It’s really nothing like it used to be.”

The river’s rapids provide a parallel to Hayden’s program, which has progressed into the mainstream of the school’s athletic fare. Hayden hopes that with a steady roster of nearly 40 boys and girls, the Hillies remain competitively afloat among the area’s finest crew programs. 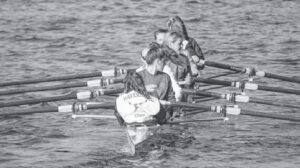 The Hillies have been rowing on the Merrimack River since 2015. Haverhill Life photo by Marilyn Caradonna

“We are a relatively new program in comparison to the others in the area,” he explained. “Funding has been a little different for us as well. And it takes a while to get things going, but we’re up to the task.”

Since its launch in 2015, Hayden’s squad has mixed it up with the region’s finest crew teams, specifically the ones from St. John’s Prep, the Bromfield School in Harvard, and Boston Latin.

“We were a little rusty in the (Textile River Regatta), but we definitely showed improvement in the next one,” said Hayden. “And that’s all we went to do: keep improving.”

With a final 2022 event slated for Oct. 30 in Lowell, the boys’ squad remained sharp under the leadership of tri-captains Jesse Looney, James Zbitnoff and Marc Ghen. The girls crew is led by Paige Gosselin, Morgan Croft and Lauren David.

Hayden’s high school experience didn’t include a crew program. Instead, he showcased his abilities at the College of the Holy Cross, where he thrived with the Crusaders before a nagging hip injury sidelined him.

“One thing that I love about this sport is that you can walk onto a team at any time,” he explained. “With sports like football or baseball, you have to start young or you won’t make the team. With crew, you don’t need any experience at all. You can just start rowing.”

When Haverhill showed interest in starting a crew program, Hayden was an obvious choice to don the coach’s attire. After assuming an assistant-coaching role for 2015’s “partial” season, Hayden went all in as the Hillies’ head helmsman the ensuing autumn.

“I always wanted to get back involved with it on some level,” he said. “So, I got lucky when the school was trying to add a program. It was all very serendipitous.”

The program has gradually drawn more and more interest from students and parents alike, most of whom lacked rowing backgrounds. Now, the team engages in regular practices from Groveland’s Pines Recreation Area, where Hayden & Co. launch their shells.

“We’re a public school trying to compete with private schools and seasoned clubs,” said Hayden. “This is historically a lily-white, elitist-type sport, which can also be very expensive. So, our first goal is to just become more competitive.”

“We need to generate community awareness around the sport,” said Hayden. “It’s important to break into the diversity of the community and the side of it that’s not yet accessing rowing. I think here in Haverhill we have a huge potential to do that.”