Move over, Tooth Fairy; the Booze Fairy is bringing gifts for adults only

A new Booze Fairy on her very first mission, Jeni Lu of Haverhill dou­ble checked the address she was looking for, then quickly and quietly deposited a basket at the front door of a stranger. She rang the doorbell and dashed down the steps and disappeared. Lu is one of near­ly 2,300 members of the Booze Fairies group serving Methuen, Andover, North Andover and Haverhill. There are many other similar groups throughout the state and across the country. They secretly de­liver wine and other adult beverages and go by such names as Beer Fairies, Wine Fairies and Sisters of the Traveling Spir­its.

Most of the local Booze Fairies are women in their thirties and forties who connected and communicate through social media. The concept took off as a way of supporting women who might need a pick-me-up to offset the daily stresses associated with the COVID-19 pandemic: social isolation, homeschool­ing and nonstop meal preparation. A Booze Fairy can be anyone who is 21 or older and wants to creates fun gift packs with a focus on alcohol to be distributed primarily to other group members. 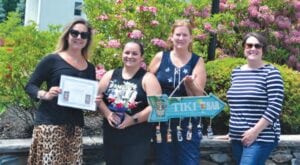 It requires a lot of help to keep the Booze Fairies thriving. Shown are (from left) group founder Michelle Silverio with members Tina Anderson, Janet Cunningham and Wendy Forsyth, all of Methuen.

The local Booze Fairies got their start when founder Michelle Silverio of Methuen received photos of alcohol packages her sister in Tewksbury was receiving and delivering. Silverio latched on to the concept and formed the local chapter with her adult daughter, Jus­tine. She soon needed help managing the group’s social media page, selecting weekly themes (Christmas in July, fla­mingos, colors, pirates), engaging the community, keeping track of each mem­ber’s status as a giver or recipient, and collecting brief descriptions of members’ liquor preferences. Creativity and shop­ping acumen are encouraged to enhance the fun of being a Booze Fairy. Members share which liquor stores have the best deals and where to buy the supplies for the various themes.

A cashier at the New Hampshire State Liquor store in Salem said she sees lots of Booze Fairies and members of similar groups. “You can tell who they are by the number and variety of nips they pur­chase,” she said. 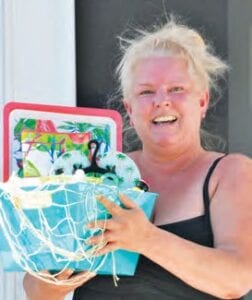 Kasey Carr Smith of Haverhill had a few laughs when she caught her fairy delivering a tropical- themed package.

Why does someone become a Booze Fairy, and what are the requirements? “A good fairy ‘boozes’ another because it makes them feel good about themselves,” said Silverio. “It is someone who shows positive energy, posts kindness outside their group of friends, assists with ques­tions in social media posts, and brings new ideas and excitement to group posts.”

The Sisterhood of the Traveling Spirits has similar requirements and offers sim­ilar benefits. It’s based in New Hamp­shire, and its 8,000 members include some Haverhill residents. You can find the group on Facebook and request to join.

The Booze Fairies suggest that mem­bers spend about $10 on a gift basket, but you can spend more or less depending on your circumstances. The Sisterhood plac­es no restrictions on what members give. “It’s about giving, but that does not mean you have to spend money to give,” said founder Jamie Gibbs. “There is a woman who makes handmade cards, and it is the sweetest gesture and puts a smile on so many faces.”

Gibbs was inspired to start the Sister­hood by her mother and cousin. “They are both in Maryland and were involved in a group like this,” she said. “My cous­in had just finished radiation and was delivered a bag of goodies, and if you could see how happy and appreciative she was. It was amazing! I have been try­ing to figure out ways to help around my community, and this is step one for me. With the lockdown there wasn’t a lot you could do, but you can always find a way to make someone smile.”

Robin Samora of Haverhill had nev­er heard of the Booze Fairies before be­coming a recipient. “I had been away for several days on vacation and was a little down because it was over,” she said. “But when I arrived at my door there was a colorful package that said, ‘Booze Fairies are real,’ with a big heart. It had a bottle of limoncello with a tutu, vodka, a lottery scratch card, and really fun things that made me laugh. It was so unexpected and so much fun.”