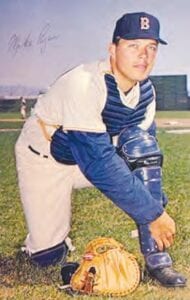 Mike Ryan, a catcher from Haverhill, signed with the Boston Red Sox in 1960 and then spent the next 35 years in professional baseball. Courtesy photo

Long before the 2004 Boston Red Sox put the kibosh on a dreaded curse, a young ballplayer from Haverhill, “Irish” Mike Ryan, played a role in turning baseball fantasy into reality. The then-24-year-old catcher named helped thrust the ’67 Sox toward the franchise’s first World Series appearance in more than two decades. Dubbed the Impossible Dream season, it culminated in an epic, seven-game clash with the St. Louis Cardinals.

Ryan passed away at his Wolfeboro, New Hampshire, residence on July 7 at the age of 78. He is survived by his wife, Suzanne, and five siblings.

“The two most famous names to come out of Haverhill are both former profes­sional baseball players,” pointed out Tom O’Brien, Haverhill High School’s athletic director. “One of them is Carlos Peña. The other one is Mike Ryan. Whenever they talk about the best athletes to ever come out of this city, Mike Ryan is al­ways one of the first names mentioned.”

Three local athletes are depicted in the Essex Street Gateway Mural, and Ryan is one of them. (Peña and College Football Hall of Famer Gene Goodreault are the others.)

Ryan attended St. James High School, which didn’t have a baseball program, so instead he showcased his catching and batting skills at Cashman Field as a member of the Karelis Jewelers team in the city’s youth program.

At age 18, Ryan joined the semi-pro­fessional Northeast League, where he seized the attention of big league scouts. In fact, during an all-star game at Yan­kee Stadium, Ryan earned MVP honors while playing with an against the league’s premier performers. “Mike had a great day out there,” recalled Paul Ryan, Mike’s cousin, who is the sports director for the WHAV radio network.

Ryan’s performance in the Bronx led to a contract with the Red Sox and a lengthy stint in Major League Baseball. His Bos­ton debut—on October 3, 1964—was a memorable one. He called the pitches for Bill Monbouquette, the Sox’ top hurler, and roped a two-run single to help his team upend the Washington Senators, 7-0.

During his three-year stay in Boston, Ryan caught a total 229 games, including 79 in the ’67 Impossible Dream run and one in the World Series. “Mike taught me what New England toughness was all about,” said legendary Sox ace Jim Lon­borg, who was Ryan’s roommate during spring training in 1965. “Broken fingers, cracked ribs—the show must go on. We always had smiles on our faces, and what a smile he had. Mike was a larger-than- life friend, on and off the field.”

During his 11-year playing career, which included six seasons with the Philadelphia Phillies, Ryan exhibited de­fensive skills matched by few peers. He compiled a lofty .991 fielding percentage while gunning down 43.6 percent of run­ners who tried to steal bases.

Ryan’s passion for and knowledge of the sport carried over into coaching; he mentored athletes in the Phillies and Pitts­burgh Pirates organizations for three de­cades following his retirement as a player. After managing at the triple-A level, Ryan spent 15 seasons as Phillies’ bullpen coach (1980 through 1995), earning a World Se­ries ring in his first season.

After making two more World Series appearances with the Phillies, Ryan set­tled into a tranquil retirement against the backdrop of Lake Winnipesaukee. In his final years, Ryan embraced the joys of gardening, boating and home resto­ration.

As charming as he was gritty, Ryan will long be cherished by friends and family alike, not to mention thousands throughout the Greater Haverhill com­munity. “It’s a bit of a unique situation that Mike attended St. James—and not Haverhill High School,” joked O’Brien. “But there’s no question that he was a very inspirational figure for all of the city’s youth sports.”

“He was my idol,” Paul Ryan said during a recent podcast. “Mike Ryan was definitely my idol.”