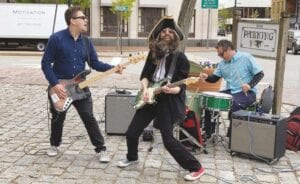 The streets of downtown Haverhill were bustling with activity during the year’s first monthly Art Walk, on Saturday, May 8, as the city’s resident and visitors sampled art of all kinds, outside and in­doors.

Along the boardwalk, people danced to live music. Some artists worked at their easels in brick-lined alleyways, while oth­ers demonstrated techniques in their stu­dio lofts. A group gathered to learn the story behind a local mural. The doors of galleries and shops were flung open, and restaurants hosted artists to show their work.

Haverhill Art Walk, initially intro­duced as a one-time event in 2019, is the brainchild of Hailey Moschella, who has collaborated this year with Creative Haverhill, a local arts nonprofit, to turn it into a monthly occurrence through Sep­tember. On the second Saturday of each month, from 3 to 7 p.m., the downtown area will feature art exhibits, demonstra­tions and performances both indoors and out. “The goal is to showcase the cre­ative community and get people into the doors of local businesses through inter­active programming,” said Moschella. 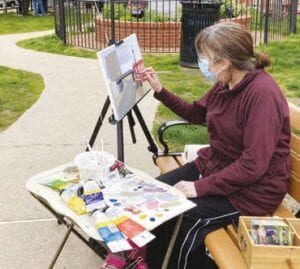 Erin Padilla of Creative Haverhill added, “It will be something for people to look forward to each month, allowing them to discover and be inspired by local creatives and to invest in the community while enjoying a night on the town.”

The buzz about this first event traveled quickly, and it was obvious that peo­ple were ready to get out and celebrate spring. Printed pamphlets mapped out a route that took visitors past plein air painters, musicians and art exhibits. The route began along the boardwalk at Har­bor Place, where artist Ann Jones paint­ed, and the music of Fake Leather Jacket set the mood.

Winding up and downside streets, the route led to Emerson Street, where Evens and Oddities introduced visitors to taxidermy art, and Triana’s Real Mex­ican Food, a newcomer to the area, fea­tured the work of artist Kristen Ander­son. Tucked in alongside Washington 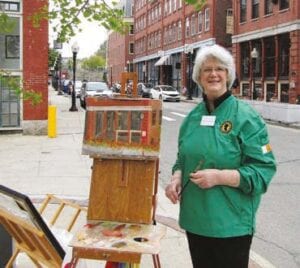 G’s Restaurant, artist Michael D. LaBranche perched at his easel, while the work of artist-in-residence Andy Li was displayed at The Switchboard. Ker­rie Sesto of Glass Onion Floral Design showed off her wares at Stem.

To help shake off some of those pan­demic isolation blues, Faith Benedetti hosted a hula hoop and spin jam in Co­lumbus Park, where the energy level was high as hoops spun, hips twisted, and ev­eryone was invited to participate. Adding to the festive air, visitors watched artist Anne Cook recreate the train bridge and surrounding buildings on here canvas.

Around the corner on Wingate Street, ceramic artist Denise DeLongis-Chesky shared her work and met with visitors to explain her technique at the Winged Rabbit gift shop. Across the street, artist Jackie Cunningham set up her easel and painted a street scene that included the Peddler’s Daughter pub, her host for the event. Each plein air artist had a single bright red balloon floating above their easel, lending a sweet Parisian vibe to the sidewalks and narrow alleyways. 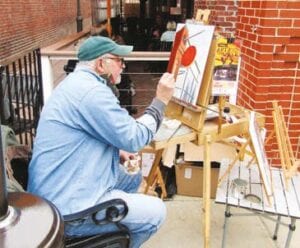 At the end of the street, a crowd gath­ered to hear Jeff Grassie recount the story of how the Essex Street mural came to be. Then it was on to the Burgess build­ing, home to several art studios, includ­ing those of neon artist Nick McKnight and encaustic painter Lisa Hertel, who opened their doors for exhibits and demonstrations. The route ended at Rise Movement Studio with a tour and raffle.

Moschella and Padilla said they were pleased to see the turnout at the initial event and were excited to plan the next ones. “I expect more businesses will par­take as the summer progresses,” said Moschella. “Every month we will offer something different. From Buttonwoods Museum, along the boardwalk, to the studios in the Burgess building, there is so much to see and do. And the differ­ent programming will allow people to see even more of our beautiful city.” 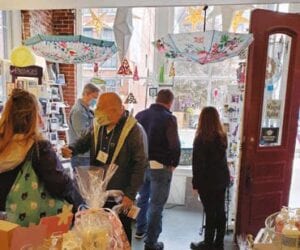 Artists, musicians and businesses who wish to participate can contact Moschella at haverhillartwalk@gmail.com.

WHEN: Second Saturday of the month through September