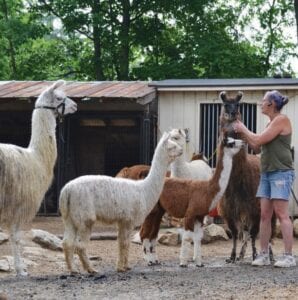 The Bourassas’ animals are treated like pets and come when called. Salem Life photos by Alison Colby-Campbell

At local farmers markets in Salem and Haverhill, Mass., kids and adults alike typ­ically make a beeline to the booth with the big furry creatures that look more like toys than real animals. The Brookline-based Everything Alpaca Farm is owned by Jim and Goldie Bourassa and, while they are interesting characters themselves, the ani­mals get most of the attention.

Last year, the Bourassas and a couple of their best behaved alpaca traveled to five or six farmers markets each week, includ­ing Salem and Haverhill, covering a total of 18 markets. This year, new restrictions at farmers markets are making it impossi­ble to participate, at least initially.

According to Haverhill’s farmers market organizer Jeff Grassie, “At the moment, Everything Alpaca-NH will not be at the market because of state coronavirus guide­lines. Sadly, no live music or kids’ activi­ties until the state tells us otherwise.”

The alpacas are a big draw at the farmers markets for children and adults. They are docile animals and beautiful to look at. 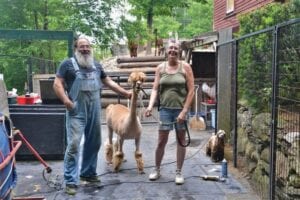 In under 30 minutes, Polly had a complete spa day, nails, hair, teeth and inoculations. She’s looking good and knows it.

“The products they sell – socks, scarves, gloves, hats – are a huge hit at the mar­ket because of the high quality. We look forward so much to having them back as a vendor when we are allowed to do so,” Grassie said.

People often confuse alpaca with lla­mas. The Bourassas have both. The farm includes 20 alpaca and four much larg­er, non-fleece-producing llamas, a turkey, some ducks and honeybees.

At the farm, as Goldie walks into the paddock a crowd of animals moves in looking for a treat or a cooling spray from the hose. She calls each by name. They vie for her attention, even when their requests for treats go unfulfilled. They are pets who happen to also be the source of fleece for luxuriously soft and warm socks and scarves.

“We often are asked whether we have to kill the alpaca to get the fiber. The answer is a definite ‘no’ we do not. We shear our alpaca annually, much like other farmers sheer sheep. And they live out their lives with us. They can live until their late teens,” Goldie says. 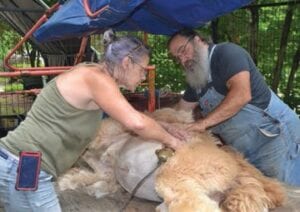 The Bourassas use a less stressful set up for sheering, and as Goldie shaves, Jim comforts alpaca Polly.

Jim hums when he is among the animals. It is a soothing sound that replicates a sound the animals sing to him: “We keep our alpacas for their whole life, even when they stop producing fiber.”

When asked how alpaca stop producing fiber, Jim pointed to his shiny scalp and said, “It happens.”

He also talked about the good life they live: “They have access to a heated and air-conditioned barn so that they can live out their lives in comfort. They love their swimming pool too. We have over 4 acres on the farm, but alpaca are herd animals and always cluster together.”

Jim got interested in alpaca on a whim after raising goats: “I just thought they were an interesting animal. We kept them for years as pets before we started doing the farmers market. Salem has been a great market for us. It’s been steady with sales, and is made up of a good group of peo­ple who really support each other. I love letting the kids meet the animals. Alpaca are very curious, so they are good with children. I always warn people not to pat them on their back. They can give a pow­erful kick, so we say, nothing good comes from the back.” 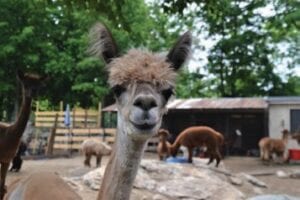 Alpaca are naturally curious. This one tried to figure out her best camera angle.

The Bourassas put a lot of thought into compassionately removing the fleece. The animals are sandwiched between a foam mattress and a board and, once restrained, carefully flipped on their side. The animals are inconvenienced like this only once a year and, at the same time, other health re­quirements are performed: Their teeth are clipped (they grow for the life of the ani­mal), a vaccine is administered, and their feet and nails are tended to. The whole process takes less than a half-hour with Jim humming and stroking the animal’s head and watching for signs of distress. Polly calls out admonishing the team for trying to clean her up, but she never exhib­its signs of distress.

“The shaved fiber goes to the New England Alpaca Fiber Pool where it is cleaned and spun. From there it goes either to Fall River to become socks, headbands and gloves, or to Bridgeport, Connecticut. For larger items like blankets, they yarn would go to Atlantic City,” Goldie says. “So, our products are all American made. We sell all sorts of unusual products too – alpaca socks for diabetics, dryer balls, fin­gerless gloves, etc. We have an honor box out front of our house to sell their products and some honey and duck eggs.”

Jim explained what he loves about alpaca: “They have a calming effect. It’s like ther­apy. And they are incredibly entertaining. We’re looking forward to being able to share them again at the Salem and Haver­hill farmers markets. But in the meantime, we are putting together a catalog of items to sell online at everythingalpacanh.com.”

• A newborn alpaca is called a cria and it weighs between 15 and 20 pounds.

• At the shoulder, an average alpaca stands between 34 and 36 inches, while a llama generally ranges between 42 and 46 inches.

• Alpaca teeth never stop growing and need to be trimmed.

• Alpaca fiber is softer than cash­mere or angora, and warmer and lighter weight than wool, without the scratchy feeling that some wool has.

• Fleece has no lanolin; it is easier to process and is hypoallergenic.

• The alpaca produces a much finer fiber than the llama. The alpaca also produces more fleece than its larger cousin and in a much greater variety of colors.

• Alpaca coats grow 5 to 6 inches and produce 7 to 10 pounds and sometimes even more fleece per year.

• Alpaca can spit, but usually it’s directed at other alpaca in a dispute over food, to ward off unwanted ro­mantic gestures, to claim dominance or out of fear. Their “spit” can be fairly disgusting and smelly. Occa­sionally it is only air and a little saliva, although alpaca commonly bring up acidic stomach contents (generally a green, grassy mix) and project them at a target.