Paddling across the waters of Haverhill 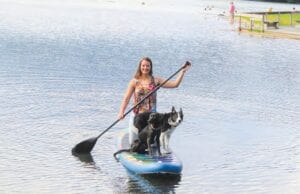 Aubrey Waz-Grant enjoyed an after-work paddle on Plug Pond with her dogs, Sage and Raz, though pad­dleboarding with dogs is always a wetter experience. Haverhill Life photos by Alison Colby-Campbell.

People are drawn to the water in Haver­hill, whether it’s the Merrimack River, Plug Pond, Chadwick Pond, Millvale Reservoir, or even the Swasey Field splash pad. Water calls our name, and we answer in myriad ways.

On the Haverhill boardwalk, above the Captain William “Red” Slavit Docks at 100 Washington Street, Aubrey Waz- Grant opened what looked like an over­sized gym bag and began manually in­flating a stand-up paddleboard. In five minutes, she was ready for an after-work paddle on the Merrimack.

Waz-Grant and her husband, Gabe Grant, moved to Haverhill from Con­necticut a year and a half ago, drawn by an awesome Washington Street apart­ment and the vibrant lifestyle she wit­nessed downtown. “We picked Haver­hill because we liked the downtown, it was convenient to both of our jobs, and we found a beautiful apartment close to the public docks,” she said. “We love the restaurants, are fans of craft breweries, and we take advantage of the disk golf course. Oh, and I love the library. I al­ways support libraries. In fact, I brought a friend down recently to get a library card.” 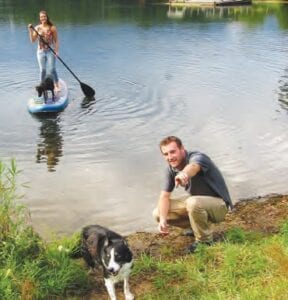 Aubrey and her husband, Gabe, moved to Haverhill a year and a half ago because they enjoy the active lifestyle the city offers.

On a later paddle at Plug Pond, Waz- Grant was accompanied by her dogs and, eventually, her husband. “I come out about three times a week,” she said. “Gabe comes out about once a week. I of­ten have my two dogs, Sage and Raz, with me. I paddle mostly on the river because we live right there, but we’ve tried Plug Pond, too, and will try other waterways in the city and surrounding area.

“It’s just fun to be out,” she continued. “It’s good exercise, and you’re part of the whole ecosystem. The river is beautiful. The river current can be strong, and if it is, I may go out for only 20 minutes. Recently I was out for two hours and watched the sun set.”

The couple bought the inflatable pad­dleboards for under $400 apiece. A hard board costs about $1,200. “We couldn’t store hard boards in our apartment,” Waz-Grant said. “We had to leave our kayaks in Connecticut, because we didn’t have the room. I did a lot of research on boards, and inflatable boards, when inflated to the right PSI, are very stable, even with the dogs. In fact, the biggest difference between the two is that the hard plastic boards can go approximate­ly 15% faster. That might be necessary if you were competing, but that’s not what we do. We bought these three or four months ago, and we will probably paddle into the early fall.”

Waz-Grant is glad to have her family together. Just six months into their mar­riage, she left her new family to live with her grandmother in Connecticut to help her manage the coronavirus lockdown at her independent senior living facility. It was 11 weeks before she returned home. She missed her husband and dogs but made the best of the isolation by writing poetry, which she self-published when she returned to Haverhill. The book, ti­tled On the Inside, is available on Ama­zon and at the Haverhill Public Library.